Why do people believe in UFOs?

Science knowledge is not an inoculation against accepting pseudo-scientific gobbledygook. I’m bemused that we are smart enough to land an automobile size payload on another planet, but still live in a culture where a significant percentage of people want to believe in implausible if not impossible things. The reality is that intelligence has nothing to do with believing in “weird things.”

A recent National Geographic Society poll reported that 36 percent of Americans — about 80 million people — believe UFOs exist, only 17 percent do not, and the rest of the people are undecided. The survey did not specifically equate UFOs with flying saucers or little green men, however.

(If there are any Martians, the pyrotechnics show of the Mars Science Lab’s descent and landing earlier this week has made them all UFO believers overnight.)

ANALYSIS: Looking for Alien ‘Bubbles’ in Other Galaxies

The percentage of UFO followers agrees with other surveys taken over the years. A 2001 Gallup Poll showed that belief in haunted houses, ghosts, and demonic possession slightly exceeded belief in UFOs. 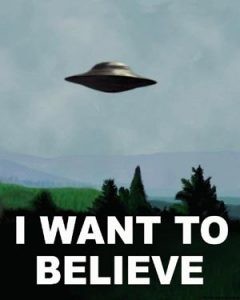 It’s pretty unlikely a ghost will make a grand appearance on CNN, or we’ll see an exorcism release the devil. But the discovery of aliens via a SETI signal might conceivably happen someday.

Fortunately, we’ll be prepared because the NGS survey shows that 77 percent of Americans believe there are signs that aliens have already visited Earth. No doubt this is anchored in mystical themes that benevolent aliens came by and helped out early civilization on huge public works projects, such as the building of the Egyptian pyramids.

Only 13 percent of 1,114 respondents said they would be afraid of aliens harming them. Apparently sci-fi films such as “Independence Day” and “Signs” haven’t made much of an impact. Nor has astrophysicist Stephen Hawking’s warnings of ray-gun wielding aliens.

ANALYSIS: Could Terrorist Aliens Cyberattack Us?

A public relations challenge for NASA and the U.S. military is that 80 percent in the NGS survey feel that the government is hiding information about UFOs. This percentage of government distrust is consistent with a 2009 CBS News poll that found that 77 percent of the population believes that the government covered-up the truth behind the 1963 John F. Kennedy assassination. On the flip side, belief that the Apollo moon landings were a government hoax dropped from 11 percent to 6 percent over the past decade.

Contrary to conventional wisdom, people of all levels of education like to believe in “weird things,” says Michael Shermer of the Skeptical Inquirer. Shermer wrote that people tend to seek or interpret evidence favorable to existing beliefs and ignore or misinterpret evidence unfavorable to those beliefs.

This is no more obvious than in the writings of “creationist scientists” who either reject or grossly misinterpret geological, biological and astronomical data to support their biblical-based belief in an 8,000 year-old universe.

This “confirmation bias” is in real science as well. The classic example is the 1903 discovery of “N-rays” a completely new form of radiation announced by Prosper-René Blondlot. At the time, dozens of other scientists confirmed the existence of N-rays in their own laboratories. But further tests showed that N-rays don’t exist at all.

How could so many scientists be wrong? They deceived themselves into thinking they were seeing something with their instruments that in fact was not there. This came on the heels of Wilhelm Rontgen’s discovery of X-rays and Paul Ulrich Villard’s discovery of gamma rays in the early 1900s. Apparently there was a predisposition to expecting that other invisible forms of radiation must permeate the universe.

Likewise, any two people can see a blob of light in the sky, one thinking it is the planet Venus and the other person predisposed to interpreting it as a space vehicle under alien control. Yes, airline pilots, and law enforcement office seen strange things in the heavens too. But this is outside of their sphere of expertise — especially when it comes to astronomical phenomena seen under unusual conditions.

Collectively, UFO stories are a sci-fi inspired projection of how we think space visitors would look and behave. Despite over 60 years of “sightings,” the purported scientific evidence is largely anecdotal and uncorroborated. The Mars Science Lab landing left more physical evidence strewn on the Red Planet than thousands of alleged flying saucers reported over the decades.

I’d say that UFO beliefs are fueled by a “secular theology” where people look for greater meaning to the universe and our relationship with it. The theme is that the aliens flying the UFOs pay attention to us, worry about our misdeeds (as evident in alleged sighting of UFOs hanging around nuclear power plants) and want to help raise us to a higher level of existence. This is simply a post-industrial age version of ages old stores of visitation by angels, demons, and other imaginary spirits.

A few of my colleagues dismiss the SETI searches as an unscientific experiment that border on theology. We imagine aliens that are intellectually made in our image: they are as curious as we are, they build lasers or radio telescopes like we do, and they are similarly motivated to devote time and resources simply to letting us know that they exist among the stars. This is hypothesis on top of hypothesis.

Also, people simply love to believe in weird things just because it’s fun. (As an example, simply listen to the audio track of the UFO sighting posted on the YouTube video shown above.) The staid, rational world described in physics, astronomy or biology 101 classes is a bore to most undergraduates.

This is exacerbated by the fact that students traditionally are taught what to think but not how to think, concludes Richard Walker and colleagues in a 2001 survey of 211 college students. One of the true/false questions was, “The government is hiding evidence of alien visitors at Area 51.” Walker’s conclusion: science knowledge is not an inoculation against accepting pseudoscientific gobbledygook.

Thankfully, today’s science renaissance of traveling to other planets and tearing apart subatomic matter is demonstrating achievements once dismissed as impossible.