How to Build a UFO? 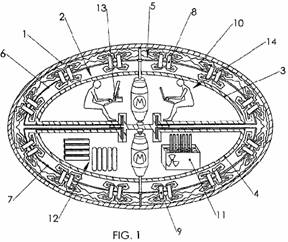 Maybe the title’s “antigravity spaceship” aim is too high (it’s a long way ’till there), but Tesla, followed by other scientists along the last century, discovered the principle of propulsion using strong electromagnetic fields. It’s not about traveling on the ground, but from the ground up, with extraordinary speed and ease.

The entire document is posted on panaceauniversity.org/D8.pdf, here is a short description of what the “spaceship” does and how it can be built, as described by Patrick J. Kelly (update: the document I mentioned in 2008 doesn’t exist anymore) :

“Tesla performed an experiment in which he applied high-voltage high-frequency alternating current to a pair of parallel metal plates. He found that the ‘space’ between the plates became what he described as “solid-state” exhibiting the attributes of mass, inertia and momentum. That is, the area transformed into a state against which a mechanical push could be exerted. This implied that, using this technique, it should be possible to produce a spaceship drive anywhere in space, if the mechanism for thrusting against the ‘solid-state’ space could be determined. Further experiments convinced Tesla that powerful electromagnetic waves could be used to push against (and pull against) what appears to be ’empty space’. The drive principle is based on the Hall-effect used in semiconductor magnetic sensors, and is called the magnetohydrodynamic (“MHD”) effect. This might be illustrated like this: 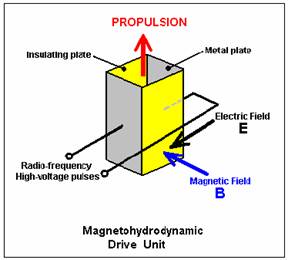 Here, a box is constructed with two metal plates forming opposite sides and two insulating plates holding them in position and surrounding an area of ‘space’. High-frequency, high-voltage alternating current is applied to the metal plates and this creates an electric field “E” acting between the plates as shown in black.
A magnetic field “B” is generated by the electrical field. The magnetic field acts at right-angles to the electric field, as shown in blue. These two fields produce a propulsion thrust “F” shown in red in the diagram. This propulsion force is not produced by ejecting any matter out of the box, instead, it is produced by a reaction against the ‘solid-state’ condition of space-time caused by the high-frequency electromagnetic pulsing of that area of space. This is enormously more effective than a jet engine. The thrust increases with the fourth power of the frequency, so if you double the frequency, the effect is sixteen times greater.

To put this into perspective, consider the force being applied against gravity to lift an object into the air. The force pulling the object downwards is gravity and its strength is given by:

The lifting force is given by:

Lorentz Force: Force on an object = Electric force + Magnetic force
F = q x E + q x v x B
where
q is the charge on the object,
B is the magnetic field,
v is the velocity of the object and
E is the electric field

As the device shown above operates directly on the space-time field which penetrates all matter, there would appear to be no reason why it should not be used to drive a conventional vehicle by positioning it in a horizontal position rather than the vertical position shown in the diagram. Throttle operation could be by very slight adjustment to the frequency of the AC pulses applied to the metal plates. However, Bill Lyne indicates that horizontal movement is better achieved by producing Tesla’s very short, high-voltage high-frequency DC pulses at the front of the vehicle while at the same time generating very high-voltage high-frequency AC waves at the back of the vehicle. This style of drive is said to pull the vehicle along rather than push it along.

Tesla’s Dynamic Theory of Gravity (1897) states that all bodies emit microwaves whose voltage and frequency are determined by their electrical contents and relative motion. He measured the microwave radiation of the earth as being only a few centimetres in wavelength. He said that the frequency and voltage were influenced by the velocity and mass of the earth, and that its gravitational interaction with other bodies, such as the sun, was determined by the interaction of the microwaves between the two bodies.

If you find the concept of producing a driving force through pushing against the space-time continuum to be difficult to accept, then perhaps you should consider the US Patent granted to Boris Volfson on 1st November 2005. The important thing about this patent (which is crammed full of long words) is not whether or not it presents a realistic mechanism for a practical space drive, but the fact that the US Patent Office in the year 2005, granted the patent after what presumably was careful consideration. With that in view, it is hardly possible to consider Tesla to have been totally confused when he designed (and built) his “electric flying machine” which operated by pushing against the space-time field.

Tesla used high voltage at gigahertz frequencies for his electropulsion system. The propulsion of a vehicle powered by a Tesla drive is by the use of an additional AC generator at the back (which stiffens the space-time continuum behind the vehicle) and a DC ‘brush’ generator at the front (which weakens the space-time continuum in front, causing the vehicle to be pulled forwards).

Tesla was very astute. He deduced that ’empty space’ actually contained:
1. Independent carriers which permeate all space and all matter and from which all matter is made. These carry momentum, magnetism, electricity or electromagnetic force, and can be manipulated artificially or by nature.
2. ‘Primary Solar Rays’ (starlight) which travel at the speed of light, having frequencies far above X-rays, gamma and UV radiation.
3. ‘Cosmic Rays’, particles in space propelled by the Primary Solar Rays.
4. X-rays, Gamma rays and UV electromagnetic waves, all of which travel at the speed of light.
5. Ordinary visible and Infra-Red electromagnetic waves which travel at the speed of light.
6. Rapidly varying electrostatic force of enormous potential, emanating from the earth and other gravitational bodies in space.

When we grasp the actual nature of the universe, it becomes clear that we have a much larger range of opportunities for producing usable energy in large quantities and at minimal cost.”