to reveal an ancient adobe pyramid, Italian researchers announced on Friday at a satellite imagery conference in Rome.

In this satellite image, the white arrows show the buried pyramid and the black arrows other structures which have yet to be investigated.

A new remote sensing technology has peeled away layers of mud and rock near Peru’s Cahuachi desert to reveal an ancient adobe pyramid, Italian researchers announced on Friday at a satellite imagery conference in Rome.

Nicola Masini and Rosa Lasaponara of Italy’s National Research Council (CNR) discovered the pyramid by analyzing images from the satellite Quickbird, which they used to penetrate the Peruvian soil.

The researchers investigated a test area along the river Nazca. Covered by plants and grass, it was about a mile away from Cahuachi’s archaeological site, which contains the remains of what is believed to be the world’s biggest mud city.

Via Quickbird, Masini and colleagues collected high-resolution infrared and multispectral images. After the researchers optimized the data with special algorithms, the result was a detailed visualization of a pyramid extending over a 97,000-square-foot (9,000-square-meter) area.

The discovery doesn’t come as a surprise to archaeologists, since some 40 mounds at Cahuachi are believed to contain the remains of important structures.

«We know that many buildings are still buried under Cahuachi’s sands, but until now, it was almost impossible to exactly locate them and detect their shape from an aerial view,» Masini told Discovery News. «The biggest problem was the very low contrast between adobe, which is sun-dried earth, and the background subsoil.»

Cahuachi is the best-known site of the Nazca civilization, which flourished in Peru between the first century B.C. and the fifth century A.D. and slid into oblivion by the time the Inca Empire rose to dominate the Andes.

Famous for carving in the Peruvian desert hundreds of geometric lines and images of animals and birds that are best viewed from the air, the Nazca people built Cahuachi as a ceremonial center, molding pyramids, temples and plazas from the desert itself.

There, priests led ceremonies including human sacrifices, drawing people from across the region.

Between the year 300 and 350, two natural disasters — a powerful flood and a devastating earthquake — hit Cahuachi. The site lost its sacred power to the Nazca, who then abandoned the area. 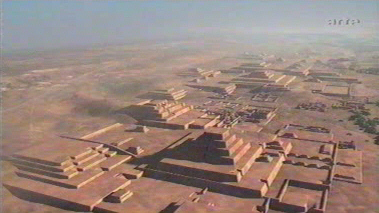 A 3D model of Cahuachi

But before leaving, they sealed all monuments and buried them under the desert sand.

«Up to now, we have completely unearthed and restored a huge asymmetrical pyramid, known as the Grand Pyramid. A terraced temple and a smaller pyramid are in an advanced state of excavation,» Giuseppe Orefici, an archaeologist who has spent decades excavating Cahuachi and has also worked with the CNR researchers, wrote in the conference paper.

Featuring a 300-by-328-foot base, the newly discovered pyramid consists of at least,

«four degrading terraces which suggest a truncated pyramid similar to the Grand Pyramid.»

With seven levels, this imposing monument was sculpted from the landscape and enhanced by large adobe walls.

«This is an interesting finding. As with the Grand Pyramid, it is likely that also this pyramid contains the remains of human sacrifices,» Andrea Drusini, an anthropologist at Padova University, told Discovery News.

In previous excavations at Cahuachi, Drusini found some 20 severed «offering heads» at various locations inside the Grand Pyramid.

«They have circular holes cut into the forehead and were perfectly prepared from an anatomical point of view,» Drusini said.

The researchers are now investigating other buried structures next to the newly discovered pyramid.

«This innovative technology opens up new perspectives for the detection of buried adobe monuments in Cahuachi and elsewhere,» said Masini. «Once we have more information about the size and shape of the structures, we might turn to virtual archaeology to bring the pyramid and its nearby structures back to life.»

An earlier version of this report included incorrect measurements of the newly discovered pyramid.