Shortly after I began investigating UFOs in the late 1980s, I started to receive reports of unidentified ocean-going craft.

Most of these reports came from a certain stretch of California coastline, from about Santa Barbara south to Long Beach. This particular body of water, I soon learned, had a widespread reputation as a UFO hotspot. After several witnesses told me they believed there was an underwater UFO base there, I decided to conduct a more in-depth investigation to determine the truth.

My first step was to survey the research of other prominent investigators. To my surprise, most of the local researchers were already aware of the sightings.

“This body of water lies between the coastlines of Southern California and Santa Catalina Island, 20 miles offshore to the southwest. The area has for at least thirty years been the scene of UFO reports of all kinds: surface sightings of hazy craft which cruise leisurely in full view of military installations, aerial spheres bobbing in oscillating flight, gigantic cloud-cigars, and at least one report of an underwater UFO with uniformed occupants.”

“For years witnesses have seen many types of UFO cruising off the Palos Verdes Peninsula in Southern California. UFOs have actually been seen to come out of the water in the San Pedro Channel.”

I had already uncovered several firsthand cases myself. My next step was to put together a comprehensive list of all the recorded ocean-going encounters in the area.

I came up with more than 50 sightings. 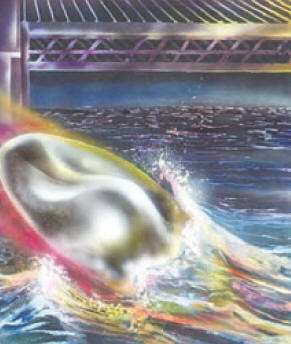 These cases were next categorized into different types.

The first and most common type are cases that take place over the coastline. In these cases, people see UFOs either from the shoreline or while they are out at sea.

What follows are several typical cases.

From the reports cited above, it should be clear that UFOs are witnessed over this coastal area in disproportionately large numbers. In most cases, they are observed a few thousand feet or less above the surface of the ocean.

It is therefore plausible to speculate that these craft may be traveling into and out of this body of water. 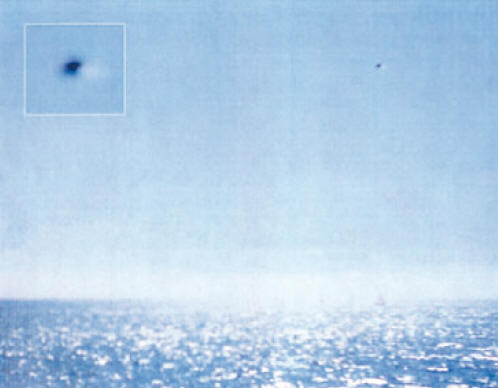 As we shall see, the next category involves UFOs that have been observed doing exactly that. These much rarer cases provide further evidence of an underwater UFO base off the California coast.

So much underwater UFO activity in one place is undeniably unusual and strongly points to the possibility that there is an underwater UFO base somewhere in this area. While the above reports alone provide considerable evidence, further confirmation of this possibility comes from another source.

Not only is there an unusually large number of sightings, landings, and ocean-going UFOs here, there are also cases of abductions. Normally, when somebody reports being abducted by aliens, they claim to have been taken inside a UFO. However, in this particular area, some abductees report that they have been taken to what is apparently an underground base.

Could it be that these witnesses were taken into the underwater base in the Santa Catalina channel?

A final piece of evidence for an underwater or underground base comes from the Topanga Canyon UFO wave of 1992 though ’94.

Topanga Canyon has been a UFO hotspot for more than 50 years. However, on the night of June 14, 1992, hundreds of unidentified craft were seen in the canyon, which is situated along the Southern California coast.

Seventeen adult witnesses have independently reported seeing UFOs on that evening. One couple, who live high on a ridge overlooking the ocean, observed approximately 200 craft rising up, one by one, from behind the ridge east of them, and then moving to various locations in the canyon.

As one of the witnesses said,

“You know when you watch something for a while… you can figure out where they’re coming from? After watching them, you got the feeling that they were going all over this area from that certain spot right there.”

That certain spot is the same location where so many underwater UFOs have been seen. And what makes this particular sighting so important is that the objects were not seen coming from above. Instead, these 200 craft came from below, either underground or underwater.

Where else could so many UFOs come from except for some kind of base?

As can be seen, the evidence is pretty strong that there is an underwater UFO base in the Santa Catalina channel. Hundreds of UFOs have been seen in the area. A significant portion of these cases involve objects going into and out of the water. And there are cases where people have apparently been taken inside this very base.

It’s hard to say exactly where this base is, but judging from the geographic distribution of encounters, the highest density of cases is along the Santa Catalina channel. It would have to be very deep to avoid detection.

The size of the base is again a matter of speculation, but because of the large number of UFOs that have been seen at one time and from the reports of the abductees, it seems safe to assume that this base is extremely large, perhaps the size of several city blocks or more.

How long has this base been here?

The modern age of UFOs began in 1947, when a huge wave of sightings swept across the United States and the world. This was the year of the famous Kenneth Arnold sighting and the alleged UFO crash at Roswell. That year also featured a strange mystery off the California coast.

It began on July 7, 1947, just days after the Roswell crash. At 3:10 p.m., two teen­agers walking along the beach at San Raphael watched as a “flat, glistening object” emerged from the ocean, flew for a short distance, then dove back into the water 400 yards from shore.

One month later, in August 1947, the Coast Guard received reports of a “strange flaming object,” which fell into the sea.

Following this incident, steamers going into and out of San Francisco Bay encountered an “undersea mountain” that appeared and disappeared in various locations in the bay. Several ships reported the mysterious mass, calling it a “reef” or “submarine mountain” that had apparently appeared overnight. Another ship reported “a large mass under water, off the Golden Gate.”

Following that, the mass disappeared. Or perhaps it just moved again.

Around this time, the naval survey ship Maury and other craft were sent to investigate another report of a “phantom reef” that had appeared about 400 miles off the coast of Southern California. No charts listed any such mass in the area. And when Captain Hambling of the Maury arrived, the “mass” was gone. The crew immediately surveyed the surrounding area and, to their shock, they found that the mass had moved again.

“Our echo sounders did pick up a strange echo when we were about three-quarters of a mile off the reported location of the ‘reef.’ It seemed that the sounders had got an echo from a mass about 1,600 yards away. We changed course, and started right towards it. Four hundred yards away from it, we found it had vanished, and we got no other echo. We tracked and re-tracked the area, using fathometers and echo sounders. We covered five square miles very carefully, and another five miles round the outside of the area.”

The “mass” however, had gone. Or perhaps it had moved and found a more permanent residence closer to shore.

Considering the huge number of underwater reports that started in the 1950s, this may have been the time when the alleged base was constructed. In any case, underwater UFOs have been encountered in this area starting in 1947 and continuing to the present day.

While it may seem hard to believe that ETs are living beneath our oceans, these types of accounts have turned up all over the world.

Ocean-going UFOs have been seen in all of the seven seas, reaching back nearly a thousand years and continuing to the present day. With their ability to travel through the oceans and skies with ease, these cases show just how advanced the visitors are.

Remember, most of our oceans remain unexplored—at least by humans…